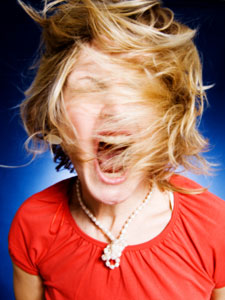 An article in today’s Daily Mail (29 November), suggests that our binge-drinking culture is creating ‘a generation of aggressive and out-of-control women’.

According to the British Association of Anger Management, the number of women found guilty of murder, vicious assault or other attacks has risen by 81 per cent since 1998.  As Simon Lawton Smith of the Mental Health Foundation claims,

‘girls face a new generation of potential triggers for problems such as premature sexualisation, commercialisation and alcohol misuse, and also some of the more long standing issues like bullying and family breakdown. All these things can be triggers for anger’.

Mike Fisher, an anger management psychotherapist, also posits a strong link between the rise in binge-drinking amongst girls and physical aggression. He argues that,

‘when girls drink, they are anaesthetising their feelings. Suddenly they are not able to cope with their emotions appropriately, but that anger has to go somewhere…They are tired of being pushed around by boys and they are fighting back. They are fed up with being the passive sex’.

The article concludes with a call for anger management to be taught in schools.

There are a number of points being made here, some of which are accurate, at least in part. Young women are under many different pressures – of which the onus to be passive, may be one. Anger – particularly in the ‘fairer sex’ – is not always seen as a legitimate emotion. At best, it can be characterised as unfeminine – whilst conversely, it is recognised and sometimes even encouraged as a desireable part of masculinity.

When boys brawl, it is often perceived as commonplace – a normal, accepted and even necessary outlet for overexcited hormones. Catfights however, are viewed as distasteful and extreme, profoundly unnatural acts of aggression. Or how about domestic violence? When a man hits a woman, it is rightly considered an outrage, a horrendous crime. Yet there are many cases of women attacking men, with equally damaging results. These are treated with much less gravitas, and even as a joke.

There are different reasons why women tend to internalise negative emotions, whereas culturally at least, men are encouraged to externalise them. (Saying that, women seem to have a degree of relational freedom and intimacy that men don’t share. When I’ve been out with girlfriends I’ll usually come back with an in-depth synopsis of everything from family life to ingrowing toenails. If I ask Glen for similar details regarding his male friends, he’ll respond with a look of blank incomprehension.  It isn’t that his friendships aren’t just as genuine as mine – just that men seem to relate in a different way). Gender expectations and values do play a part. But it is an oversimplification to say that the aggression provoked by binge-drinking stems simply from women ‘fighting back’ at being ‘pushed around by boys’. Women can be bullied by other women and by ourselves, just as effectively.

By the same token, I wonder if alcohol is really the catalyst for a ‘sudden’ rush of inappropriate emotion. Instead, I’m inclined to see it as one element in the wider issue of how we recognise and handle our affections, especially those we see as negative. Is alcohol prized for its anaethetising qualities? Or are its opposite effects, just as enticing? Rather than smothering passion, does drunkenness provides instead, an acceptable channel for expressing emotions that are otherwise repressed? A way even, of exaggerating and inflaming them?

Certainly, this has always been my experience. When I was at college, and afterwards, especially whilst working in the city, I drank a lot. Regularly. And with one considered aim – to become completely, enormously drunk . To a limited extent, alcohol offered the chance to obliterate the feelings and fears I couldn’t identify, let alone address. But more than that, it was only when drunk, that I felt I could let those feelings out. I could cry or get angry or break things or lunge at unsuitable men, or broach topics that seemed out of bounds when sober. And whilst such behaviour was wrong and inappropriate in the cold light of day, under a fog of liquer it was somehow ok. Yes I behaved badly. But it wasn’t me, it was the drink. (Or rather, the drink let out the real, messed-up me that I tried to keep hidden but kept seeping out, like blood under a closed door).

Whilst it may not be attractive, anger can be a very seductive emotion. Interestingly, depression is often referred to as ‘frozen rage’ and I think there’s a lot in that – it’s anger that you can’t quite access or feels unsafe to express. Given the choice between anger and depression, I’ll always opt for for the former. Depression is cold, empty and watery. It renders you helpless and immobile. Anger however, is hot and sticky.  It propels you into action. With anger you can do something. It feels good. It is energising. It gives you a target, a scapegoat, (even if that is yourself). There’s nothing quite so empowering as the feeling that you’ve been wronged, that there’s something or someone to blame. To take charge and lash out and vent your spleen at the things that are hurting you is so much more comfortable than dissolving in a puddle of self-hatred and sadness.

I suspect that within a religious context, the issue is exacerbated further. After all, anger is wrong – right? As an unbeliever, it felt kind of inappropriate. But as a Christian, it’s a glaring offense. The only way to deal with it is to pretend it’s not there, to bury it deep and hope that it emerges diluted, as a temporary sadness. Or to wait for it to seep out of my ears and into a convenient receptable whilst I’m sleeping. (That’s what happens with all my other sins, right?)

Of course, this isn’t the answer. Thankfully, Scripture takes a very different attitude to my emotions, even the sticky, black ones like anger. The Bible doesn’t condemn such passions. In fact, the very opposite. Jesus is surely the most emotional man who has lived – a man who wept over the death of his friend Lazarus, despite knowing that a few minutes later, he would raise him from the dead. And ‘gentle Jesus, meek and mild’, didn’t just feel sad. He is a God who also gets angry. Really, properly mad. When Jesus drove the money lenders out of the temple, we read that he was ‘consumed by zeal for his father’s house’, (John 2:17). And in Mark 3:5, when the religious leaders refused to answer his questions, he ‘looked around at them in anger, deeply distressed at their stubborn hearts’. But perhaps the rules don’t apply to Him. What about those admonitions directed at us? Ephesians 4:26 – ‘don’t let the sun go down on your anger?’ Or, ‘in your anger, do not sin?’ Well, the focus here isn’t upon anger in itself. Anger is not a sin. It can’t be if Jesus felt it. The issue is not the emotion, but rather, what we do with it. Jesus’ anger was righteous, measured and deserved. In contrast, our anger, the anger of men, is too often selfish, out of control, unchecked and misdirected. That’s why James writes, ‘“Everyone should be quick to listen, slow to speak and slow to become angry, for man’s anger does not bring about the righteous life that God desires”.

He goes on in chapter 4:  “What causes fights and quarrels among you?  Don’t they come from your desires that battle within you?  You desire but do not have, so you kill.  You covet but you cannot get what you want, so you quarrel and fight.”

The road that ends in quarrelling and murder begins with desiring and coveting.  We might worry at external shows of anger, but the heart of the matter is how we handle our internal desires.  I, for one, struggle to sort through these desires, and I’m not sure our churches are always the safest context for this to happen.  Naming these desires can be hard enough, let alone praying them through.  Yet prayer is precisely what these verses go on to recommend (James 4:1-3).

So often, I beat myself up for feeling emotions that are God-given and a legitimate part of who He has made me. The emotions themselves are ok. But instead of taking these feelings to Him, I try to repress them or fuel them into actions that end up hurting others and myself. I pretend they’re not there and look to props like alcohol or food to disguise and discharge them. Then I wonder why I feel so bad. So messy. So tired. So angry.