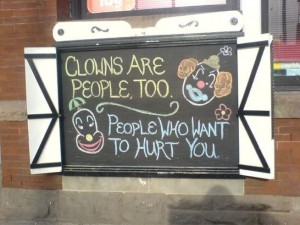 What are you afraid of? If you’re anything like me,  (neurotic), the list runs into the hundreds. Currently, clowns and long-haul travel are topping the charts.  Imagine being trapped on a plane with a clown.  Just thinking about it I need a lie-down and some tablets ending in ‘pam’.

In a 2005 Gallup poll a national sample of adolescents between the ages of 13 and 15 were asked what they feared the most. The question was open ended and participants were able to say whatever they wanted. The most frequently cited fear (mentioned by 8% of the teens) was terrorism. The top ten fears were, in order: terrorist attacks, spiders, death, being a failure, war, heights, gang violence, being alone, the future, and nuclear war.  And we say that young people don’t think enough.

Common anxiety disorders include agoraphobia, claustrophobia, panic attacks, OCD, Generalised Anxiety Disorder (GAD – when sufferers feel in a state of high anxiety all the time), Body Dysmorphic Disorder (BDD – aka ‘Ugliness Syndrome’ – thinking you look ugly when you don’t), social phobia (fear of being the centre of attention) and Post-Traumatic Stress Disorder. In the past I’ve had panic attacks and they’re just horrible – suddenly you’re overcome by a terrible, often nameless fear and dread that paralyses you and makes it difficult to move or breathe.  The first time it happened we went to A+E as I was convinced I was having a heart attack. I still think they’re one of the most distressing and uncontrollable experiences.

Things that come to be feared are often ancient threats: snakes, spiders, heights, storms, darkness, blood, strangers, social scrutiny, abandonment, leaving home. But we find it harder to be frightened of things that are more recent threats: cars, guns, cigarettes or alcohol – all of which are statistically more likely to kill you than say, spiders. Studies show that aversion therapists find it very difficult to induce fear in say, alcohol with alcoholics, just as parents may have a hard time persuading little Jonny that he can’t really fly. I’m more frightened of my plane crashing than my car, of contracting ebola rather than heart disease.  But which is more likely?

So, there’s a whole host of fears to choose from. But some social scientists reckon we’re actually born with only two fears – fear of falling and fear of loud noises. (I’m guessing that newborns don’t have a lot to say on the subject, but we’ll let that one go). The rest are all our own invention.

Fear is not always a bad thing.  It encourages the production of adrenalin, which sharpens the mind and the reactions, preparing you for the coming struggle against whatever it is you fear. When we hyperventilate, we take in more oxygen and get rid of more carbon dioxide.  Sweating makes us slippery – easier to escape. Too little anxiety leads to dangerous behaviour – but too much is disabling. Phobias can often be exaggerations of natural fears. The problems come when we interpret neutral situations as fearful or allow such fears to dominate our lives, e.g. agoraphobia.

So how do I prevent my fears from mastering me? The truthful answer is that I’m still working this one out. But the Bible has a lot to say on the subject and that’s been helping me to move forward.

Over and over again in Scripture I’m reminded not to be anxious and not to fear.  Now, that’s not a guilt-inducing platitude with all the pastoral sensitivity of telling someone depressed to ‘cheer up’.  But it is a recognition that there are many things in life that make us anxious and afraid – and that feeling this way is not in itself bad.  The question is, what do we tell ourselves when we feel like this? Because like it or not, even if you’re just keeping the worries away by being busy or smothering them, you’re telling yourself something.  Like, ‘these are too big for me to handle’.  Or ‘I don’t know how to cope’.

What are your fears? And what are you telling yourself when you feel them?