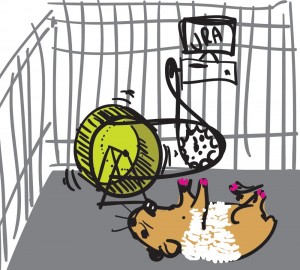 Statistics claim that 1 per cent of the population is affected by an addiction to exercise. But when does a healthy pursuit become an addiction? A juggernaut that starts as a way of coping with life and ends up taking it over?

The term originated with Dr William Glasser after he studied long-distance runners in 1976. Glasser noted that many of them felt depressed when they couldn’t train.  He concluded that there’s such a thing as a positive and a negative addiction. A positive one involves a love of the activity, which is then scheduled around daily life and results in positive physical and psychological benefits.  A negative addiction however, is one which rules you – disrupting normal life, work and relationships, as well as even physical health.

Negative addictions can be subdivided further, into primary and secondary exercise dependency (ED). Secondary EDs are the most common and are often accompanied by eating disorders.  They’re fuelled by the desire to be in control, to change or restrict one’s body shape.

Primary EDs are driven instead by the exercise ‘high’.  What happens is this –  vigorous exercise kick-starts our nervous system. This not only increases our levels of mood-improving ‘happy hormones’ (or endorphins), but also releases molecules that shut down pain signals reaching the brain. The result is a natural high.

Debate is still raging as to whether or not ED qualifies as a ‘primary’ addiction, rather than simply a feature of another disorder, such as bulimia. Some researchers argue that exercise dependence occurs only in the presence of an eating disorder. However, multiple studies have found the existence of exercise dependence in individuals who did not suffer from poor body image or disordered eating habits. This could suggest it is a primary disorder that results in exercising for its own sake.

Warning signs may include the following;

If you feel distressed at the thought of not being able to exercise every day, or unsure how you would manage your feelings without exercising, it may be time to seek help.