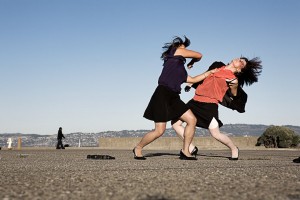 According to a survey carried out by Harper’s Bazaar (Jan/Feb 2011), 72 per cent of us are more likely to lose weight to avoid being judged by women, than to impress a man.

We also eat fewer calories when with a man, but when we eat with women we can double our intake, spurred on by ‘I will if you will’ collective behaviour.

Scientists say that what’s at work is an ‘adaptive evolutionary mechanism’.  Women are biologically programmed to measure themselves against other females and then to act on what they see. But the purpose, biologically speaking is to get the best partner.  So while we might want to avoid the judgment of other women, according to this, what’s at stake is the goal of a man.

The University of Arizona also carried out a survey on the relationship between eating disorders and female intrasexual competition (ISC).  They measured competition on two levels – either for partners/mates or for status.   They predicted that female ISC for mates would be  the strongest predictor of bulimia, but that competition for would be the strongest predictor of anorexia nervosa. In fact, the results showed that  ISC for mates was the driving factor for all types of female competition – general competitiveness, perfectionism, body dissatisfaction, drive for thinness and both bulimia and anorexia.

Female competition would have been a challenge even if in the days when you and buxom Sabrina were the only girls in the village, (why doesn’t Farmer Ned pick me? I can milk a cow in half the time it takes her).  Nowadays however, the scope for comparison is even greater.   Not only on the streets and in the shopping centres, but in our living rooms and supermarkets.  With America’s Next Top Models I have a catwalk in my kitchen.

So can we blame the media for our collective body angst?  Well, not quite.   Studies show that it is women who already have a high level of body dissatisfaction who make negative comparisons with other women. And in fact, whilst Cate Blanchette might be  ‘smokin hot’, she doesn’t have access to my husband, so I’m not that threatened.  But if we’re out for an evening with friends and there’s a bit too much skin on display, that’s a different matter.

Is this competition really a problem? And if so, is it driven by the desire for a mate?  What do you think?