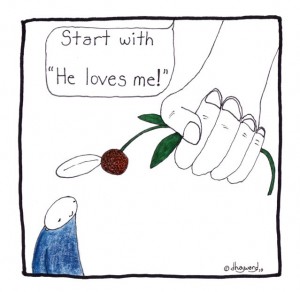 At the moment I’m trying to read the book of Chronicles.  (Note ‘trying’ – those lists are something else.  There’s a few sticky bits on the page where I’ve successfully slept-drooled over some especially long genealogies).  But this morning was a beaut. It was about God speaking to King David.

I like David. He makes a lot of big mistakes, but he loves the Lord and he’s a trier.  I also suspect he’s one of those guys who ends up break-dancing like a turtle at the first opportunity.  ‘I’m a turtle, spin me.  SPIN ME’.

Sorry – long day and it’s taking more time than usual to marshal the synapses.  Here’s the story.  David wants to do something for God.  He’s got his own palace, so it seems only fair that God get a temple – or at least a granny flat.  But the Lord is having none of this.  No, He says.    You’ve got this the wrong way round. Everything you own David, I’ve built for you.

It’s a basic point that God doesn’t need us to do stuff for him – but one we forget.  And I wonder if it’s the mature Christians who  need reminding most. Like David, we might be in positions of leadership or responsibility. We’re so aware of our desire to honour God and serve Him that we can end up forgetting that He is the God who Gives.  We love because He loves us first. And learning to receive is harder than working your way up the ladder of godliness.

I don’t know if you’ve ever one of those interminable coffee-shop arguments with a female friend.  Father Ted sends it up brilliantly but I can’t find the clip.  It goes something like:

‘PUT YOUR MONEY AWAY’

Blahblahblah.  Fast-forward thirty minutes and you’re wrestling on the floor of Marks and Spencer over the price of a doughnut.

I hate being dependent on others.  I hate feeling like I’m in debt – even if it’s something very small. Neediness is not ok.  It’s wrong.  Uncomfortable.  Exposing. If you pay it yourself, you know where you stand.  You’ve earned it.

Not so with the gospel. Unlike that latte, grace can’t be bought.  It’s given.  Not just as the foundation of our faith or a nice kickstart to get us across the starting line.  It’s our  daily bread.  It’s the gift of a loving God, the outpouring of His Spirit – at work in and for us.  Grace gets us out of bed, not just to the prayer meeting.

We might not like being dependent, but if we’re believers, then that’s the point.  Jesus was dependent.  He tells us that He does nothing without His Father.  Nothing. And He’s the Son of God.  As part of the Trinity, He’s bound up in the most passionate. powerful and loving relationship the universe has ever known. And in the face of such love, all we can do is fall on our faces and say ‘thank-you.  Thank-you Father’.