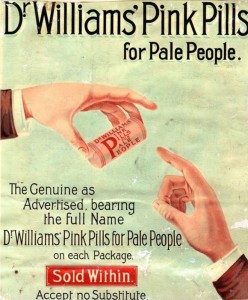 The NHS issues about 40 million prescriptions a year to deal with depression.  That’s twice the number prescribed a decade ago.

Recently I cornered a GP on this issue. I asked him if he felt that doctors generally were over-prescribing antidepressants. Without  blinking, he said yes. But he went on to say he had no choice. You see there’s 2 kinds of depression – one that you’re sort of born with (endogenous) and the other that is triggered by outside events (reactive).  Most of the cases he sees are reactive – stemming from loneliness, unemployment, bereavement, etc. That in itself is nothing new  – people have always had problems.  What is new, is that we lack any structures for dealing with our unhappiness.  In the past, if someone came to him and they were having a hard time, he would encourage them to use their existing support networks of friends and family.  Now, however, such networks simply don’t exist.  The economics mean that it’s  cheaper and easier to give someone a tablet than to suggest counselling or some other method of dealing with stress.

In my view there’s a time and a place for tablets.  There have been occasions when I’ve felt like I literally couldn’t go on.  I was able to get pharmacological help so I didn’t do anything stupid . I don’t care whether there’s a stigma attached to antidepressants – if it’s a choice between taking a pill and giving up, then take the pill.

At the very least, they can get you to the point where you can look at the issues that are overwhelming you, without wanting to do yourself harm. But if there are identifiable triggers or things you could work through, then surely the aim is to use the tablets as a temporary crutch and then get off them if you can.

This of course, is dependent on you having the support, motivation and resources to tackle such issues. It doesn’t apply to cases such as schizophrenia, which might require life-long medication. Nor does it apply to all instances of depression, some of which are not provoked by specific causes.

Finally, you should both go on and come off tablets in consultation with your GP.  I learnt this the hard way after going cold turkey without telling anyone.  I spent a long time oscillating between murderous rage, insomnia and fits of weeping. When I did talk to the GP he asked if I’d been experiencing any mood swings and pointed out that one effect of dramatic withdrawal was feeling suicidal.  All this could have been avoided had I just done it more slowly.

Contrary to popular belief, antidepressants are not ‘happy pills’ at all.  They won’t turn Eeyore  into Tigger. They just get you to a point where things look ok, not a  life that looks like the ones in magazines or gravy commercials.  I’m enormously thankful for the ways that my diagnosis and medication have helped me in the past.  But in my own experience anyway, it’s easy to see the drugs as the finishing line, rather than just the starter pistol.

2 thoughts on “Keep Taking the Tablets?”