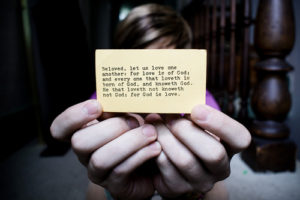 If you’re struggling with an eating disorder and you go to your GP, you’re doing something enormously brave.

You’re making yourself vulnerable. You’re sticking two fingers up to an addiction that can kill. You’re saying no to a host of voices that tell you, “you’re not sick enough, you don’t deserve any help.”

The last thing you need to hear from your GP are the same words. “I’m sorry, but you’re not ill enough to qualify for treatment.”

Sadly, this is what’s happening, to one in eight children with a “life-threatening condition” like severe anorexia. And even for the “lucky” ones (who qualify for treatment), there’s an average waiting time of 110 days*.

110 days of fighting and pleading and weeping and despairing.

110 days to move from life-threatening to life-ending.

110 days to think about what the doctor says. To take it as fuel. To feel like you’re safe…and more desperate than ever to prove you need help.

110 days to move from wanting help, to no longer caring.

110 days to move from helping yourself, to giving up.

I know this, because it’s happened to me. Twice.

The first time, I was 13. My mum noticed I was losing weight. She dragged me to the doctor. There was a long queue in the surgery and the doctor seemed tired and distracted. “You probably need to get out more,” he said, “Are you getting enough exercise?’ (Note to self: redouble the jogging).

Mum asked him to take a second look. He glanced at the clock and sighed. Then he rolled up my sleeve. ‘Not much of you, is there? I take it you’re eating enough?’

I mumbled that it was hard, but he nodded before I’d finished. He turned to my mum.

“Look, she’s a teenager. Her body’s changing and it’s not unusual to have irregular periods. Nothing a good night’s sleep and some exercise won’t sort’. And that was that.

I could barely speak, let alone run. My cheeks were sunken and I was permanently cold. People were noticing that something was wrong. But I no longer cared.

We made an emergency appointment with a different doctor. This one said, “you need treatment now. In another week it’ll be too late.”

That was the first time. The second time, I was in my twenties. I was losing weight and I made an appointment for myself. Once in the surgery, I regretted my decision. Burning with shame, I tried to explain. ‘I’ve got a history of anorexia’. I cleared my throat. ‘And I think – I think, it’s starting up again’.

The doctor examined me and then my records.  ‘Your BMI is dropping very quickly,’ she said. ‘You can’t afford to lose more weight. I’ll refer you to a specialist treatment centre – but I’ll warn you now, the waiting lists are considerable. I don’t think you’ll qualify for inpatient care – you’re not thin enough.’

I took this as a challenge. A few months later, I received an appointment for the eating disorders wing of a local hospital. By that stage my weight had plummeted further. They said I still wasn’t sick enough for inpatient care.    ‘Come back in a month’s time’ they said, ‘and we’ll monitor your progress.’ (The subtext: we’ll help you if you lose more weight).

I jogged home and resolved to eat less. A month later, when I did qualify for care, I no longer wanted help.

I don’t blame my GP. They’re overstretched and under-resourced. They can refer you; but they can’t make beds where none are available. And I don’t blame the treatment centres either.  They have to take the most critical patients, (unless you can afford to pay for yourself). And for the average ED inpatient, it costs £510 a day.

Research shows that the earlier you receive treatment, the better your chances of recovery.  The longer you struggle, the  the more it costs, physically, mentally, emotionally and financially.

The government has promised extra funds for children’s mental health services of £1.25 billion over the next five year. But only £143 million has been allocated so far. And it’s not just eating disorders.  It’s children who are self-harming, anxious and suicidal. It’s families who are at the end of their strength.

In these situations, churches have a vital role to play.  They can’t force an anorexic to eat; or stop a self-harmer from cutting, or lift a life-threatening depression.  But working in partnership with mental health services, they can minister to those who suffer.  They can support patients and loved ones and provide practical assistance: looking after siblings, helping with hospital costs, praying and walking alongside those who feel helpless and alone. They’re there before the emergency services step in and they’re there afterwards too.

Sometimes we feel like we have nothing to offer in comparison with “the professionals”. But consider this:

110 days of “bearing one another’s burdens,” compared with 110 days of feeling alone.

110 days of Christ-like love compared with 110 days of growing despair.

The system may be failing, but love never does.

* Report by the Children’s Commissioner for England, 2015.