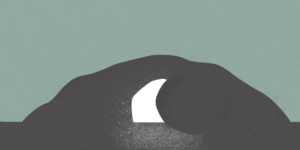 In ‘Unapologetic: Why, despite everything, Christianity can still make surprising emotional sense’, Francis Spufford describes the beginning of his conversion. It started with an argument with his wife. A huge, all-night argument that left them bruised and broken:

“When daylight came, the whole world seemed worn out. We got up and she went to work. I went to a café… and nursed my misery along with a cappuccino.”

In the cafe, Spufford surveys the scene:

“I could not see any way out of sorrow that did not involve some obvious self-deception, some wishful lie about where we’d got to. (Where I’d got us to.) She wasn’t opposite me anymore, but I was still grinding round our night-long circuit in my head. And then the person serving in the café put on a cassette: Mozart’s Clarinet Concerto, the middle movement, the Adagio.

If you don’t know it, it is a very patient piece of music. It too goes round and round, in its way, essentially playing the same tune again and again, on the clarinet alone and then with the orchestra, clarinet and then orchestra, lifting up the same unhurried lilt of solitary sound, and then backing it with a kind of messageless tenderness in deep waves, when the strings join in. It is not strained in anyway. It does not sound as if Mozart is doing something he can only just manage, and it is not sound as if the music is struggling to lift a weight can only just manage. Yet at the same time, it is not music that denies anything. It offers a strong, absolutely calm rejoicing, but it does not pretend that there is no sorrow. On the contrary, it sounds as if it comes from a world where sorrow is perfectly ordinary, but still there is more to be said. I had heard it lots of times, but this time it felt to me like news. It said: everything you fear is true. And yet. And yet. Everything you have done wrong, you have really done wrong. And yet. And yet. The world is wider than you fear it is, wider than the repeating rigmarole is in your mind, and it has this in it, as truly as it contains your unhappiness. Shut up and listen, and let yourself count, just a little bit, on a calm that you do not have to be able to make for yourself, because here it is, freely offered. You are still deceiving yourself, said the music if you don’t allow for the possibility of this. There is more going on here than what you deserve, or don’t deserve. There is this, as well. And it played the tune again, with all the cares in the world.

The novelist Richard Powers has written that the Clarinet Concerto sounds the way mercy would sound, and that’s exactly how I experienced in 1997. ‘Mercy’, though, is one of those words that now requires definition. It does not only mean some tyrant’s capacity to suspend a punishment he has himself inflicted. It can mean – and does mean in this case – getting something kind instead of the sensible consequences of an action, or as well as the sensible consequences of an action. Getting something kind where you thought there’d only be consequences. It isn’t a question of some beetle-browed judge deciding not to punish you. It’s just as much a question of something better than you could have expected being slipped, stealthily, into a process that was running away.

Recently we thought about girls and self-harm. We saw that the issues run deeper than exam stress and Instagram envy. To face the problem properly means entering a realm of profound spiritual dislocation and existential dread. But that’s where Jesus loves to work. He has come not for the healthy but for the sick, not for ‘first world problems’ but for our blackest, soul-twisting trauma. And into such a pit he comes like Mozart to the heartbroken. Jesus is what mercy sounds like. In fact Paul says that’s who Jesus is: mercy on legs:

At one time we too were foolish, disobedient, deceived and enslaved by all kinds of passions and pleasures. We lived in malice and envy, being hated and hating one another. But when the kindness and love of God our Saviour appeared, he saved us, not because of righteous things we had done, but because of his mercy. He saved us through the washing of rebirth and renewal by the Holy Spirit, whom he poured out on us generously through Jesus Christ our Saviour. (Titus 3:3-6)

There is no silver bullet to ‘solve’ self-harm. But there is a Saviour who comes to surround crushed, angry, sin-soured souls, to lift, soothe and bless us.  In a voice of ‘calm rejoicing’ he says, ‘Listen, and rest for a moment on the peace only I can bring. There is more going on than what you deserve, or don’t deserve. There is this, as well — there’s Me.’

If this is an area where you struggle, perhaps you can find a quiet space, fire up Mozart, and in that tone of calm rejoicing, let the words of Titus 3 lift you. There is kindness, love, a Saviour, there is mercy, there is washing, there is re-birth, renewal and a Spirit poured out on you generously.

Perhaps what you fear is true. Perhaps what you’ve done is wrong. No matter what, there is a kindness and love that is greater still. This is what mercy sounds like.